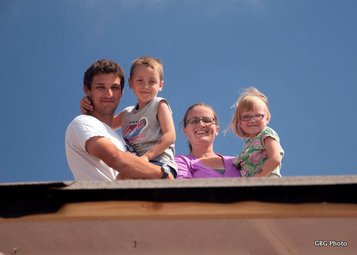 Biography: Erin grew up in Lynden, WA and Brian in Sumner, WA. Both went to Central Washington University (Ellensburg, WA) to pursue a college degree.  They were both drawn to Mercer Creek Alliance Church’s college program and they eventually began to serve as youth leaders in their youth ministry.  Through their service, they became friends and eventually fell in love.  On separate occasions, Brian and Erin felt God’s strong call to cross-cultural ministry, which played a role in bringing them together.  They faithfully served God at Mercer Creek while they were in school.  Following an internship at Mercer Creek in 2002, Erin was hired as the youth pastor at Mt. View  Community Church in Snohomish, WA.  Brian moved there as well and worked as a detention officer in a juvenile correctional facility.  Shortly after their arrival to Mt. View they were married.  Three years later, they had their first child (Nathan), and Brian took over the role of youth pastor.  Later came a second child (Olivia) and now they are a family of four.  Until the end of March 2011, Brian was still serving as youth pastor of Mt. View, while Erin worked as a barista at a local Starbucks.  Currently, they are preparing to move to Ensenada, Mexico to begin a new assignment for the Alliance in May 2011.

Prayer requests: This is a time of transition in their lives as they settle into a new life in Mexico and all that entails.  Pray for their marriage to become stronger in these years of transition and pray for their two young children as well.  Also pray for extended family members who may be nervous about the times ahead.  But praise God for his hand of grace upon this family.  They truly feel blessed to be where they are in life.